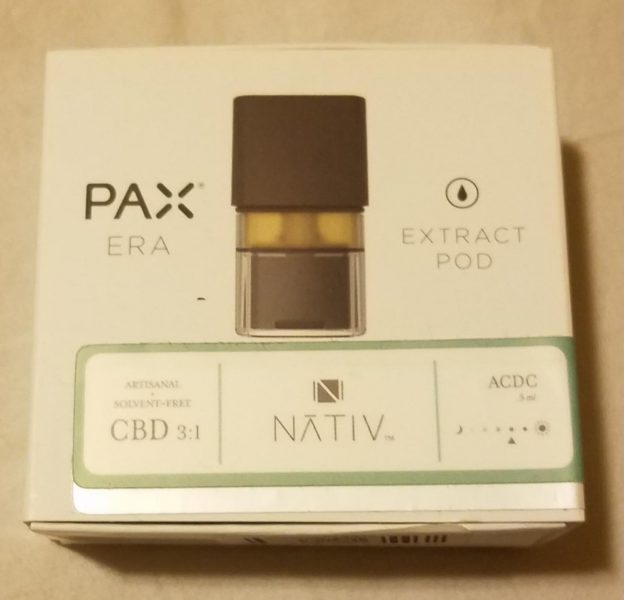 ACDC (not the band AC/DC my mom didn’t want me to listen to) is a CBD-rich strain known for its extremely low THC content, around, 22:1 CBD:THC. Because of this, it’s ideal for almost anyone, anytime of day, and highly effective.

I spent much of the day stuck in traffic, my body a tight ball of stress. When I got home, my stomach promptly went into spasm, causing twisting pain. I popped the 3:1 NATIV ACDC pod into my PAX Era battery and took three puffs.

Will this pod and I get along like, well, peas in a pod and ease my pain?

In this NATIV ACDC PAX Era Pod review, you'll learn about its: 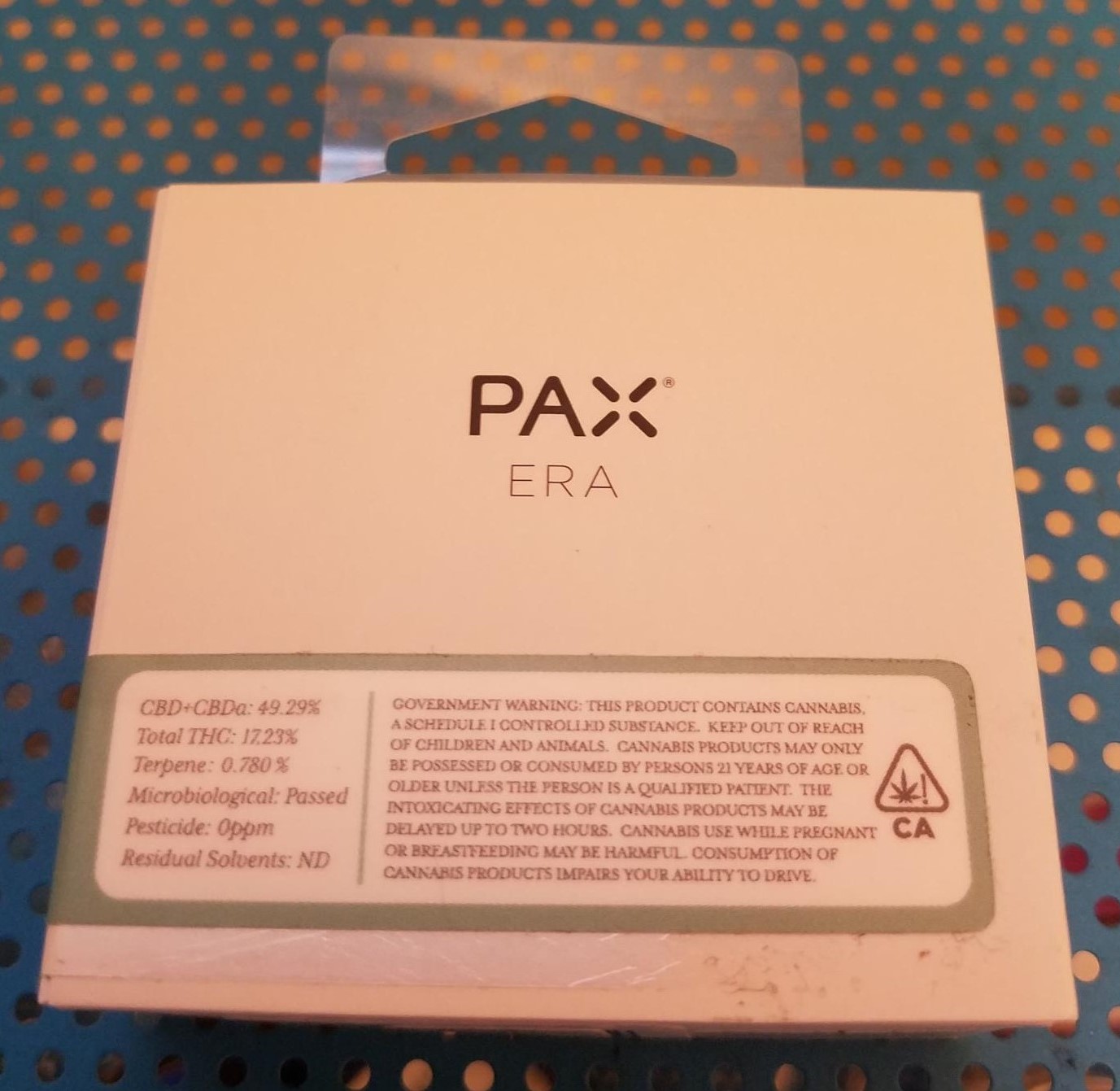 The ACDC PAX Era box’s design is about the same as all of the other PAX pods I’ve come across: minimal white cardboard like you’d find at the Apple Store.

The box itself has a graphic indicating the best time of day to use, the cannabinoid content: 49.29% CBD+CBDa, 17.23% total THC, 0.780% terpenes plus lab tests for micro-biologicals, pesticides, and residual solvents.

Unfortunately, there’s no way to verify these results. I’d also like to see full cannabinoid and major terpene profiles and know what the other 32.7% of this oil consists of.

When I opened the box, I expected to see a card with info on the recommended vape temperature like the last NATIV pod I tried, but no luck.

The pod comes in a canister with a sleek and clever design, sporting a hard-plastic see-through window and a child-proof twist top that could fit on a prescription pill bottle. I initially had trouble opening it! Wait, if I struggled to open a child-safe twist top, does that make my ex right?

And unlike the my last NATIV pod, this one had a sticker on the top and bottom of the cardboard slipcase to keep anyone from tampering with it.

While I like this clean, muted style, it’s not nearly as eye-catching as many other brands that utilize PAX pods. The pod itself is clearly labeled so I won’t risk of mixing up this pod with the rest of my of mood-altering characters.

Quality, Ease of Use

The oil is clear and almost colorless, with a slight buttery tint (thankfully without a buttery taste like California chardonnay). While it has a rich, sunny color, the oil was thinner than I like.

As the label says, there’s only 0.780% terpenes, so the taste is subtle. It offered a pleasant sour flavor that I expect from the ACDC strain, which was more delectable than NATIV’s OG Rosin pod (also reviewed).

However, the flavor does have some inert taste that I can’t quite put my finger on, something you don’t expect in a Pax Era Pod. Still, the overall flavor isn’t bad, but not as tasty as a CBD cartridge like the Marley Natural Red.

This lack of thickness coupled with the slightly vague flavor makes me wonder if some filler was added. 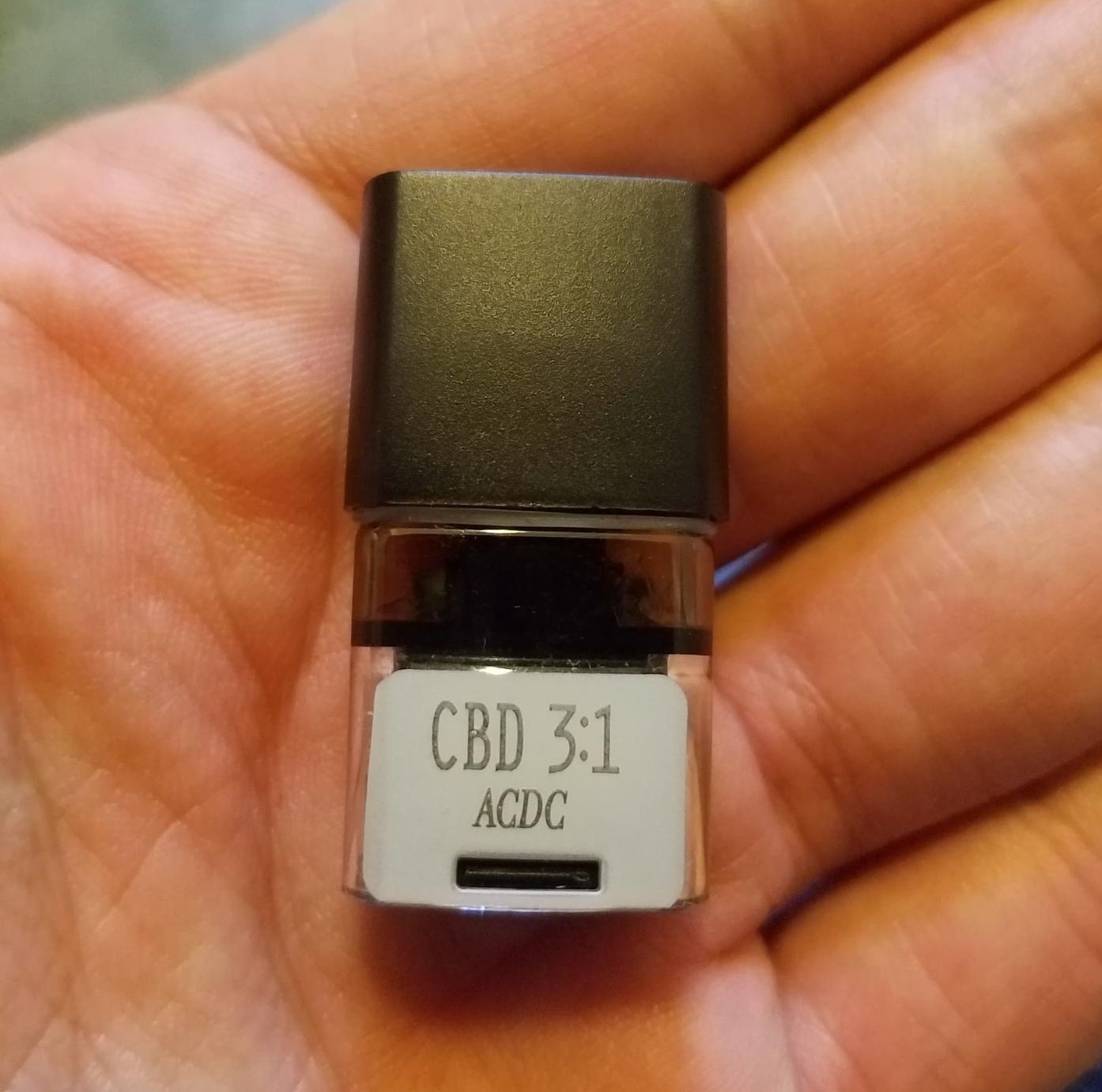 Set at the suggested 640°F (which I had to find on their site) and this pod provides a thick, smooth and sizeable vapor cloud I like. Surprising considering the other  last NATIV pod I tried didn’t produce nearly as much at its suggested temp. Luckily, you can always crank up or reduce the temperature to your preference.

After three hits I started calming down, racing heart settling. Finally some relief. This lasted for about a half hour until I started to puff again. They may not be as long-lasting as other CBD vapes (like Select’s Ringo’s Gift), but that may be because of the equal ratio (I usually prefer a 1:1.)

Expect a slight head-change as a result of the mild levels of THC in this vape, but expect it to be chill. A great choice if you’re new to cannabis and want to ease into it.

For around $56, the price is on par with many other CBD vape oils; the fact that it’s a PAX Era-compatible pod makes it an even greater value! However, seeing that 32.7% of the oil is unaccounted for makes me uneasy.

Nugg Score: How the Nugg Team Rates This Product

The NATIV ACDC pod helped me survive a high-angst day. Its efficacy and high-quality, leak resistant design make them more unique than most, especially with the app allowing you to control the heat to a single degree.

This tasty PAX Era 3:1 ACDC vape greatly eased my stress related symptoms. I only wish I knew what the over 30% of unknown oil consisted of. The cost is comparable to other PAX pods – just remember to get the PAX Era battery. Otherwise, like trickle-down economics and warm Coca-Cola, this pod won’t do anything for you!