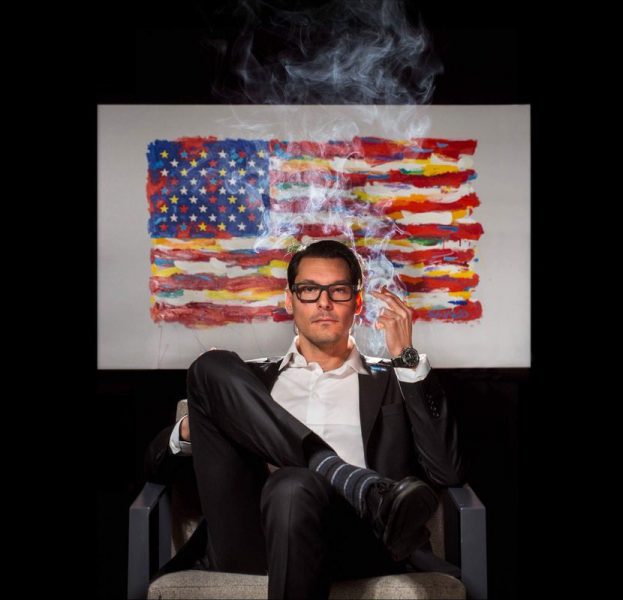 There’s a lot riding on this midterm election for cannabis enthusiasts and entrepreneurs. Our Chairman of the House Committee on Rules Pete Sessions is blocking every cannabis vote he can. Our Attorney General Jeff Sessions is gunning to send cannabis enforcement into hyper-drive. Worse, our President is, at best, indifferent to the drug war’s consequences.

We desperately need strong supporters in Congress to join the Congressional Cannabis Caucus and push for legislation to end the war on drugs once and for all.

So when we see a campaign photo of a handsome Gen Xer sporting a tasteful dark suit and black-framed glasses through a cloud of marijuana smoke — and definitely inhaling — it’s going to get our attention.

Who Is Benjamin Thomas Wolf?

Former FBI investigator Benjamin Thomas Wolf is the last person most of us would expect to become a champion of ending the drug war. His career is chock full of law and order.

A Kent, Ohio native, Wolf’s law enforcement career started when he was recruited by the FBI during a Washington D.C. internship. For years his work included counterintelligence, espionage and terrorism investigations.

During that time, he was one of the first responders at the Pentagon on 9/11 and an investigator for the 2001 anthrax attacks. Wolf even served in the Middle East and Africa as a security and human rights liaison with the State Department. It’s safe to say Wolf takes the law very seriously.

Why then, is he so comfortable talking about his use of a Schedule 1 drug? And how does he plan to help the cannabis community move forward with legalization? We called him to find out, and he was more than happy to fill us in on the details.

Nugg: Did you ever participate in cannabis investigations or enforcement for the FBI, and did you ever talk about the issue with your coworkers?

Wolf: No. I never did those types of investigation. All of my work was at the national security level. I did espionage, counterintelligence investigations and counter-terrorism. As a federal agent, those were unauthorized substances. So, I’d never dealt with cannabis. I’d never taken any drugs whatsoever while I was working for the government. And they’re fairly strict about this. They do drug tests, background checks, so that’s just not something we did. It’s not something that we talked about.

Nugg: Do you think it should be a topic of conversation there now?

Nugg: What’s your favorite way to consume cannabis and when did you start using it? I’m assuming it was a long time after the FBI?

Wolf: I started using cannabis just a few years ago here when I moved to Chicago. I was just starting on my Ph.D. and a friend of mine came here from California. We used it together for the first time and I realized that it’s just a wonderful recreational substance for creativity and relaxation. It helps with anxiety. As for how I use it, I usually smoke it in the evening. It’s just a nice way to quiet my plane while I walk the dog or work on my dissertation.

Nugg: Do you prefer to see cannabis descheduled or rescheduled?

Wolf: Well, let me talk about the election for a minute because, as you know, I’m going up against an incumbent who has a million dollars in the bank. He does not want universal health care. He does not want to legalize cannabis. I do. He does not want the option of free higher education. I do. I would like to have it so people can use cannabis legally throughout the United States. And I want all drugs decriminalized. I say it all the time. If you’re using heroin, it’s because you have an addiction problem. You’re not concerned about prison or anything else. We should be looking at this as a health issue and a public safety issue. If we decriminalized these narcotics and drugs, we could get people the help they finally need.

Nugg: How do you think this is going to help veterans moving forward?

Wolf: Most of the veterans I speak to here in Chicago are cannabis users. I served in Iraq multiple times, and I had no idea how many veterans were secretly using cannabis until we put this ad out. Now they’re looking to me to lead this movement. I’m incredibly proud to be representing the cannabis community — helping it stand up and finally have a voice. The cannabis community has been ostracized and isolated and even arrested, and it’s time they can finally stand up and be proud of what they’re doing. We’re going to keep moving forward until this is legalized federally.

Nugg: What’s your opinion about the federal government‘s attempt to curb gun rights based on cannabis use?

Wolf: I have mixed emotions on that. I’m a gun owner myself, and I trained on these weapons with the FBI and the State Department. I think cannabis users can’t get approved for what they call a FOID card which is the firearms owner identification document here in Illinois. I’m not sure if that’s the right way to go. You can drink alcohol and handle firearms, which is this huge safety issue. But I think this is something that we should talk about after it’s legalized. Otherwise, I’d be putting the cart before the horse. We can get it legalized and then we can work out the parameters of when you can have a firearm and when you can’t. You know, we put out a commercial two weeks ago of me holding an AR-15 and talking about it being a public safety hazard. These are military weapons designed and manufactured to kill dozens of humans, and we’re talking about school shootings right now. This is the same weapon used in all of these school shootings. Assault rifles need to be banned, immediately and indefinitely.

Nugg: There are less than 20 days until the election. What can cannabis supporters in Chicago do to help your campaign?

Wolf: We meet every night in our campaign office from 6pm to 8pm. It’s at 2048 W. Chicago Ave. We love local volunteers. We love the support. We definitely need volunteers to go canvassing every weekend and we’re also starting to canvass during the weekdays now.

We also ask for small donations. We aren’t taking any corporate money on this campaign. We aren’t taking super PAC money or special interest money. So small donations mean the world to us. Also, they can share information about us on Facebook and other social media streams. Honestly, just talking about what we’re doing is the most important thing. Martin Luther King was able to get a million people to march on Washington D.C., and he didn’t have a Facebook page. Word of mouth is an incredibly powerful thing if you go in and talk to your friends in Chicago, or where ever you are in the world.

And we are asking our neighbors in Chicago to vote before the 20th. And not only do I ask that you vote for me, but cannabis is on the ballot in Cook County as well. So the cannabis community really needs to show up here in Chicago and support cannabis at the polls.

The average age in my district is 33 years old. These are people that use cannabis routinely and they’ve been waiting for someone like me to publicly stand up make this statement. Now they’re flooding in to help us and we absolutely love it. So please, remember to vote. Early voting has begun, and it’s time for us to stand up as a community and vote and be heard. I would be proud to represent not only the cannabis community but my district in Illinois as a whole, and to be seen as the next generation of Democratic leadership for this nation.

To find out more about Benjamin Thomas Wolf or join his efforts to legalize cannabis in Illinois, please go to wolfforcongress.com, follow him on social media below, or call (312) 600-7256. You can also donate to his campaign here.