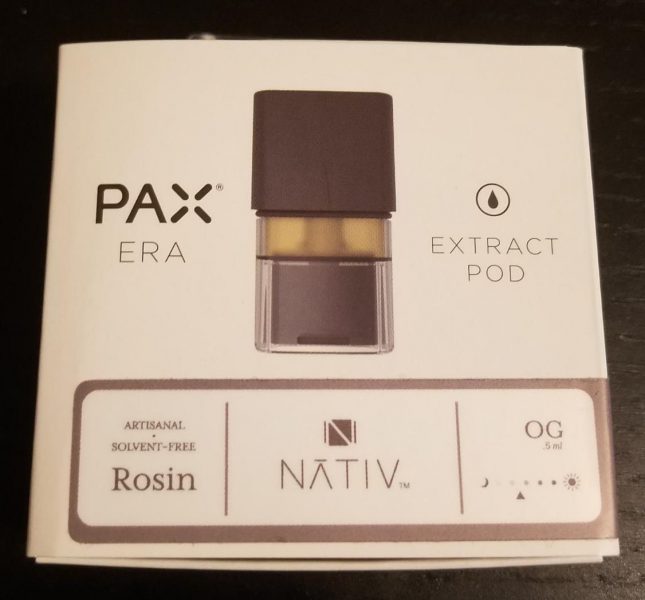 While almost every brand emphasizes cannabis’ medicinal properties, NATIV focuses on the health benefits of having fun.

The Venice, California based brand wants you to live a healthier and happier life using their pre-rolls, concentrates and Pax pods. Do so relaxing at the beach, listening to great tunes, enjoying time with friends–being active and communal. All of their products, like this OG Rosin Pax Era Pod, are 100% solvent-free and designed to create an refined, artisanal cannabis experience.

Let’s see if this pod lives up to NATIV’s reputation as I assess it for your benefit.

In this NATIV OG Rosin PAX Era Pod review, you'll learn about its: 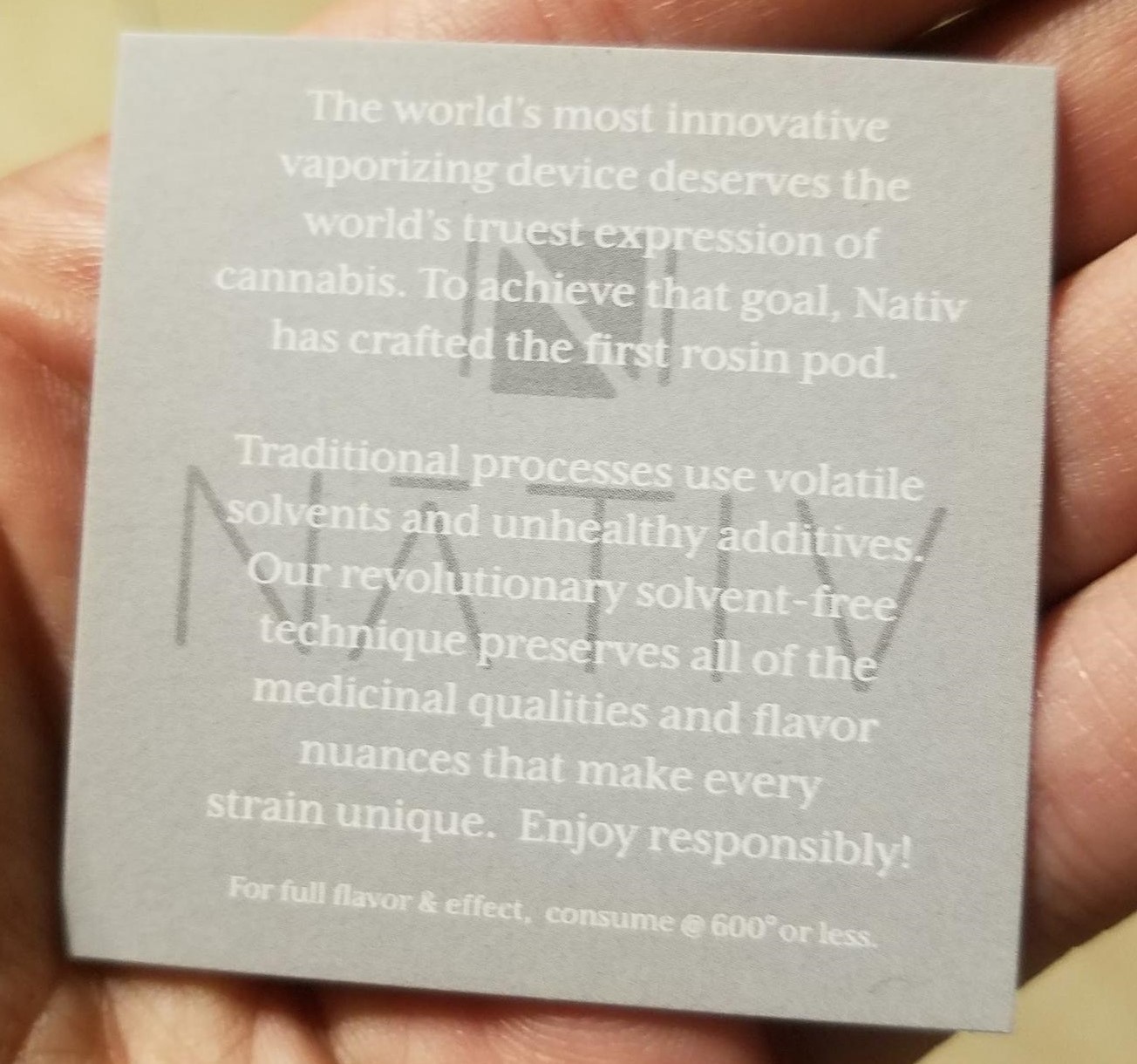 All of these Pax Era pods have the same design: a small, minimal, white cardboard box with a stylish canister within. While I like NATIV’s simple, stylish and muted branding, it doesn’t really stand out from the other Pax Era pods on dispensary shelves. I think they should use a Bedazzler™ on their design! That’ll do it.

One noticeable distinction is a little chart with the sun and moon indicating this OG strain is more suitable for evening use. I also like how the see-through window lets you view the discrete pod and oil before buying. After opening, the child-safe twist top appears to keep it safe. Still, I’d like to see a seal ensuring it hasn’t been tampered with.

NATIV states this pod passed microbiological, pesticide and residual solvent tests, yet there’s no mention of the testing company and no results. (After googling, I found it was SC Labs.)

Clearly there’s room to improve the information I need to make a fully informed buying decision. I understand there’s limited space to say everything, but as a consumer I definitely want to know this missing info. This is no time for secrecy, people!

Quality, Ease of Use

NATIV prides itself on its low heating technology, designed to maximize the terpenes found in freshly harvested bud. The company uses a proprietary ice water sieving technique, and it is a big deal to produce rosin through solvent-less techniques.

This PAX OG oil sits in food grade plastic with dual wicks and airflow, not to mention it’s leak resistant. Just remember: like all Pax Era pods, you need the Pax Era battery to use, which is incredibly easy to operate; just plug in and play!

Worried about overheating and coughing? Make the vapor quality whatever you want it to be! Control precise heat settings with the PAX app to ensure a comfortable hit every time.

NATIV recommends enjoying this oil at 600°F or less, making for really smooth vapor, but you can enjoy it however you like–even if it’s by a single degree! If only I could control summer temperatures the same way. 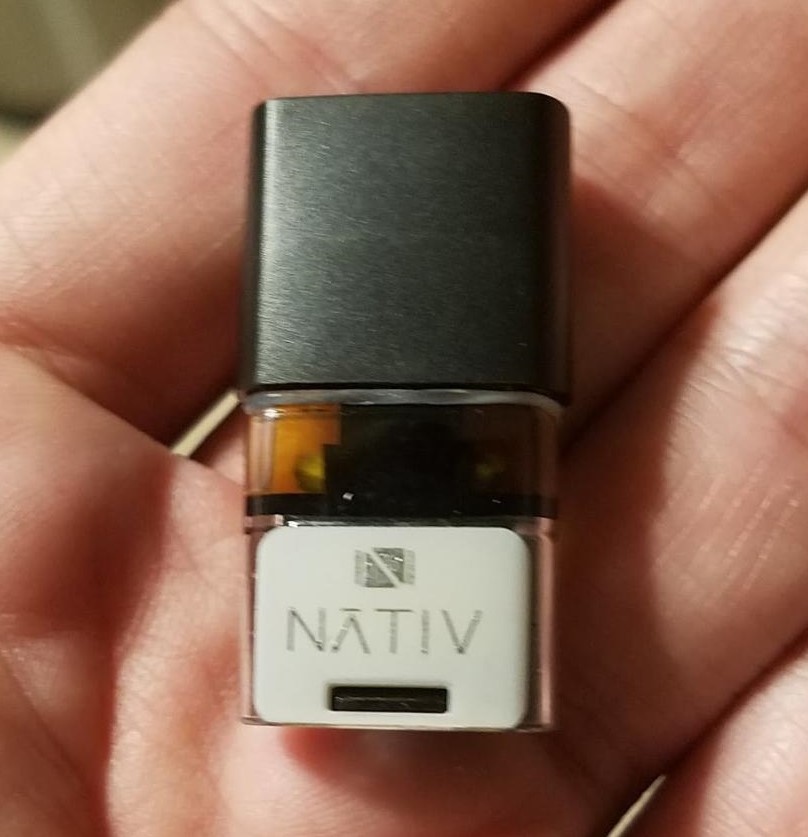 The oil is clear and bright yellow with a slight copper hue, though a little thinner than I hoped, signifying the possibility of cutting agents. That mysterious 30.39% cannabinoids might explain it.

As the label indicates, this pod is only 0.64% terpenes, so the flavor is extremely subtle. It was tough trying to examine the taste, but concluded it was earthy with a slight hint of iron. I’d prefer bacon over metal, but ya can’t win ‘em all.

Because of the precise and adjustable temp, the effects are as potent as you need them to be! I took a couple of small hits on low and initially didn’t feel anything. Then I turned up the heat, got a huge hit and was instantly baked as a potato. Vapes don’t usually hit me like that, so it was a pleasant surprise!

Some OGs can get my anxiety going, but not this one–it gave me a nice, clean full-bodied indica effect. I’d highly recommend this for sleeping or end-of-the-day unwinding. It’s an excellent pain reliever, too, and great for battling insomnia.

Despite its potency, sleek design and adjustable temperature, about $75 for a half-gram of Pax pod oil and $30 for the battery, if you don’t already have it, adds up.

Nugg Score: How the Nugg Team Rates This Product

Big stars for a fully customizable experience drawing on the strength of the PAX product line, and easy sense of relief NATIV’s Rosin OG formulation provides. The taste is super subtle, which likely has to do with low terpene content. While the indica oil was effective, the cost was not.

When you consider the higher price for a pod (and battery) against other quality cartridges on the market, it’s hard to rationalize for most budgets. I wish this PAX Pod was a lot cheaper and had more information about what exactly the formula’s chemical breakdown is.