Would Donald Trump Be A Marijuana Friendly President? 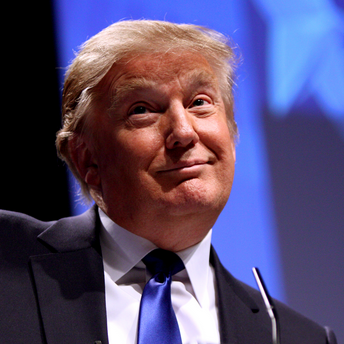 If you follow politics, or for that matter if you follow any media outlet in America, then you know that the 2016 Election is in full swing, and there are a number of candidates that are running for President of the United States. The candidate that has been receiving the most attention lately, for better or worse depending on how you feel about him, is clearly Donald Trump. Donald Trump has been a long time businessman, has been a reality TV star, and is one of the most controversial figures in America right now. Putting all of his other political views aside, how does he feel about marijuana?

As seems to be the case on a lot of things with Donald Trump, the answer is not exactly clear. Donald Trump has made conflicting statements over the years in regards to marijuana. Tom Angell highlighted some of those statements in an article that he wrote for Marijuana.Com:

In 1990, Trump called for legalizing all drugs. ”We’re losing badly the war on drugs. You have to legalize drugs to win that war,” he said. “You have to take the profit away from these drug czars… What I’d like to do maybe by bringing it up is cause enough controversy that you get into a dialogue on the issue of drugs so people will start to realize that this is the only answer; there is no other answer.”

But at the 2015 Conservative Political Action Conference, Trump stated that he’s against the legalization of marijuana. ”I think it’s bad, and I feel strongly about that,” he said. “They’ve got a lot of problems going on right now in Colorado, some big problems.” However, when asked about the states’ rights aspect to marijuana laws, Trump said, “If they vote for it, they vote for it.

So based off of those statements, it sounds like he is against legalization and feels ‘strongly about that’ but that he is behind medical marijuana ‘100 percent.’ He respects states rights when it comes to marijuana policy. How about marijuana decriminalization? For that I turn to an interview that Trump did on the Morning Joe show, which was quoted by The Daily Caller:

Joe Scarborough: What about like marijuana? Should a kid be thrown in jail because he gets busted for marijuana?

Donald Trump: I don’t really think so. And I think that maybe the dealers have to be looked at very strongly. But then you have states all of a sudden legalizing it. So it’s sort of hard to say that you’re in one side of the border and you go to jail and you’re on the other side and can you go into a store and buy it. So there is going to be changes made there, Joe, and there has to be. But you just can’t. So when you mention the marijuana, that is a very tough subject nowadays, especially since it’s been legalized.

So essentially Donald Trump is against legalization, but doesn’t think that anyone should go to jail, and that states need to have similar marijuana policies and that ‘there is going to be changes made there,’ specifically referring to states that have legalized. Clear as mud? Would Donald Trump be a marijuana friendly President? It sounds like if your state voted for reform, he will respect that. However, don’t expect him to spearhead any marijuana reform efforts from the White House if he is elected. Donald Trump is better than most candidates when it comes to marijuana policy, especially compared to people like Chris Christie who leave no doubt when it comes to their opposition of marijuana. But, Donald Trump could definitely be better at establishing exactly where he stands on marijuana policy in America.