Blog  >  Culture  >  Entertainment  >  Why Does Weed Make You Laugh? As Told Through Film

Why Does Weed Make You Laugh? As Told Through Film 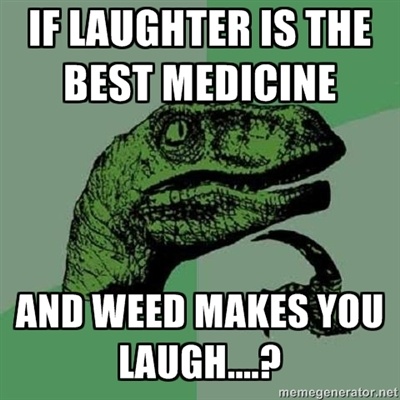 We all know that marijuana can make you laugh hysterically–at almost anything–but why? Here we’ll examine cannabis use in movies and how the plant’s social stigma has changed since the the early days of cinema.

The Beginning of Cannabis in Cinema

In 1936, a church group financed a film titled Tell Your Children, intended to depict use of marijuana (or “marihuana” in the terminology of the film) as a one way ticket to crime and debauchery. It was soon purchased by an exploitation film producer, who re-released it as Reefer Madness. The entirety of the film is rooted in baseless scare tactics, written not to educate viewers about potential risks of cannabis use, but to make marijuana look very bad. 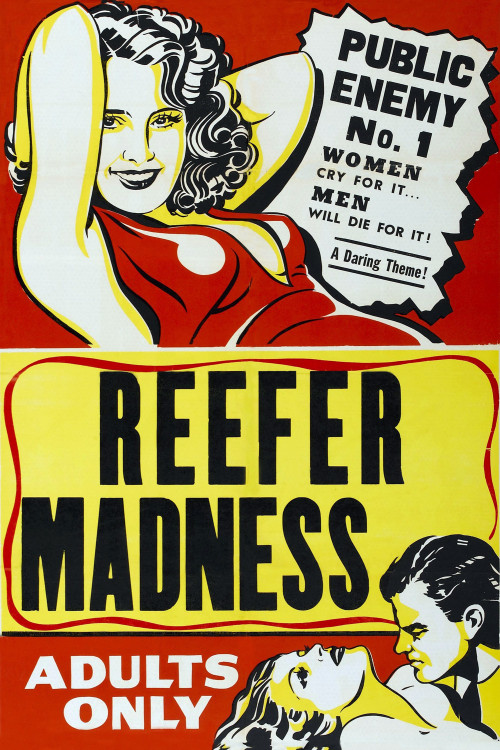 A poster for Reefer Madness

In the 1970s, when cannabis counterculture was on the rise, the film became an ironic cult classic and is still screened to this day. Though public perception of marijuana is following an upward trend in terms of acceptance, some law and policy makers are still influenced by less extreme but nonetheless analogous rhetoric to the same, unsubstantiated propaganda found in the film.

But rather than focus on these modern day echoes of some of these unfounded allegations, today’s viewers opt instead to make light of what’s ultimately a ridiculous and poorly made film. Something about the idea that marijuana leads to murder is so funny that it’s remained a cult classic for the forty odd years since its rediscovery.

The Rise of the Stoner Comedy

Around the same time that Reefer Madness got big, Cheech Marin and Tommy Chong invented the stoner comedy. In my eyes, this dynamic duo is a quintessential example of why weed makes you laugh. Though they had been a popular comedic duo for years before the release of their debut film, it was Up in Smoke in 1978 that laid the foundation for the still thriving subgenre.

What, exactly, constitutes a stoner comedy is up for debate. Films like Half Baked or Pineapple Express, whose plots revolve entirely around weed, are unarguably stoner comedies that make you laugh. Other films, like The Big Lebowski or Clerks, feature plenty of marijuana use and are generally enjoyed by pro-cannabis audiences, but have enough fans within the filmgoing public to generally not be pigeonholed into the subgenre.

However, it’s a testament to the comedic viability of marijuana that critically acclaimed directors like Joel and Ethan Coen (of The Big Lebowski and many other great films) would make it a focal point of possibly their most beloved comedic film. Likewise, Pineapple Express was well received and earned more than double its high Hollywood budget.

Why Does Weed Make You Laugh?

Marijuana is funny for two directly related reasons: weed makes you laugh, and it’s fun to laugh about weed.

This first reason is the more obvious one. Though Reefer Madness has probably been enjoyed by some sober viewers, it’s no coincidence its popularity spiked in an era when marijuana use was beginning to become far more widespread. The change in perspective that often accompanies cannabis-induced inebriation can be enough to make something totally normal—say, typical living room furniture or the way a friend says a certain word—seem inexplicably funny. To the minds of those under the influence, absurd stories about marijuana can seem like comedy gold.

A classic sequence from Dave Chappelle’s Half-Baked introduces audiences to the Enhancement Smoker, played by Jon Stewart. He asks Guillermo Díaz’s character if he’s ever seen Scent of a Woman (he has). But more importantly, has he ever seen Scent of a Woman… on weed? This is absurd not because Stewart’s character is smoking pot and watching movies, but because he’s championing Scent of a Woman, of all possible films. In large part, the Enhancement Smokers of the world are to thank for the lasting popularity of films like Reefer Madness and Half-Baked.

Even audiences a little more hostile towards marijuana than the average person may still find material about weed funny. Take The Big Lebowski as an example: its central characters are not just dumb, but profoundly dumb; heroic, some might say, in their stupidity. But, like the archetypal cinematic stoner, they may not always be responsible human beings, but they will always come through with lots of laughter and positive vibes.

These character traits are far from indicative of all marijuana users, but are uniquely compelling due to the low-stakes fun implicit in marijuana use. “Low-stakes” is the key term here: the comedy of most stoner films relies on mining this low-stakes fun for any and all comedic potential. This is how a stolen rug in the beginning of The Big Lebowski results in multiple near-death experiences later on in the film. 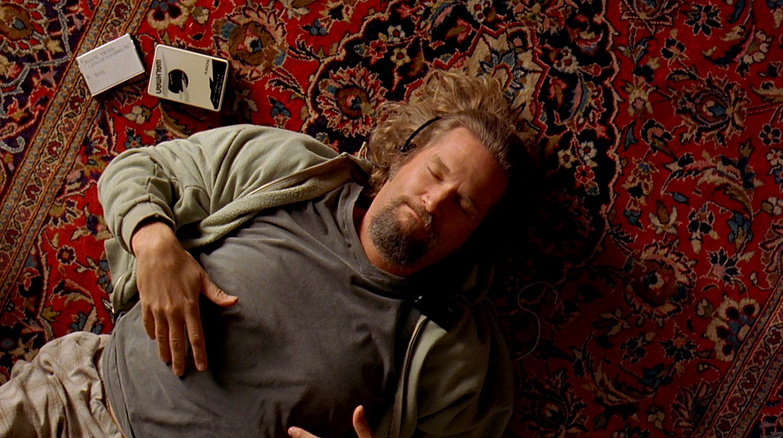 Jeff Bridges as “The Dude” in The Big Lebowski

Exactly why marijuana tends to induce laughter is up for debate, though scientists have come up with a few significant theories. One study attributes increased blood flow to the right frontal and left temporal lobes of the brain, which are regions of the brain associated with laughter. Exactly how much these regions are stimulated has not been concluded, however, so this could be the sole contributing factor, or one of many. Another theory involves the capacity of cannabis to work as an antidepressant. Mood is thus improved, and most likely—though not conclusively proven—a good mood makes people more likely to laugh.

Like most other art forms, stoner comedy is evolving alongside technology. Internet memes are one way acolytes of our current technological paradigm are sharing weed jokes with one another. Reddit’s hugely popular r/trees board is one notable source of cannabis-related memes. 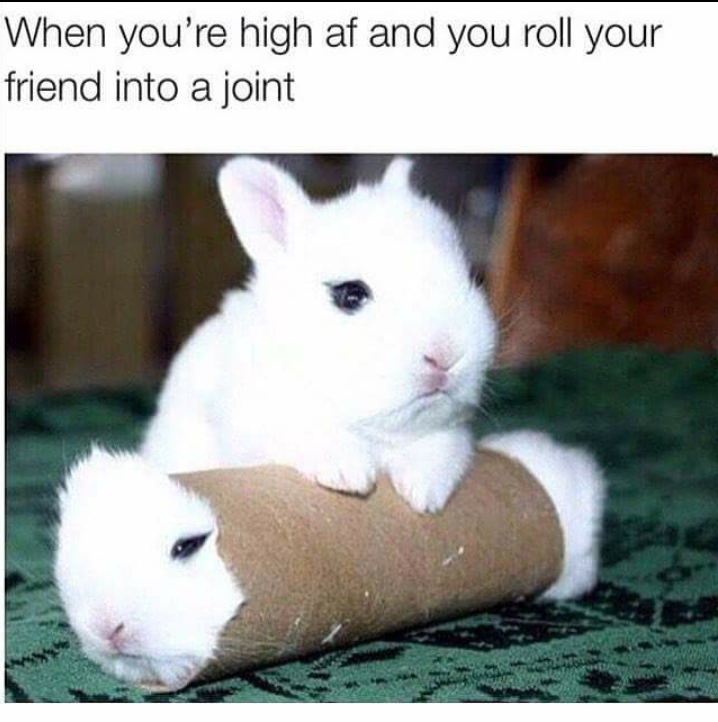 On Facebook, the terminology for a high quality meme is taken directly from cannabis culture (the term is “dank meme.”) With currently more than 21,000 likes, a page called Bernie Sanders’ Dank Meme Stash is one of the top hubs of support for the presidential candidate outside of his official fan pages. The page is so popular, Vice recently published an article about it.

Or consider comedian Doug Benson, who’s championing a newer, purer kind of stoner comedy. Benson is the first comic to develop a successful podcast based on live consumption of medical marijuana. The show, titled Getting Doug with High, has featured Jack Black, Margaret Cho, David Cross and many other successful comics under the influence of cannabis alongside Benson.

It’s no surprise that jokes about marijuana follow new opportunities allowed by advancing public policies and technologies. Marijuana will always be funny to both those under its influence, as well as those who enjoy the laid-backness of stoner comedy.

As long as people are still creating online content, there will be new memes about weed—and fortunately, a lot of them are pretty funny.