Blog  >  Cannabis Education  >  New Patient Guides  >  What Are Cannabinoids & How Do They Affect Your Cannabis Use?

What Are Cannabinoids & How Do They Affect Your Cannabis Use?

Imagine, for minute, that you’re a patient with a life-threatening form of epilepsy. Every day a series of electrical storms originating in your brain render your daily existence a living hell. Anticonvulsant medication, radical diets, and invasive procedures provide marginal relief, but they leave you feeling like a zombie. In the end, no matter what the conventional treatment, the seizures always return.

Incredibly, medical marijuana, the same drug your parents used to smoke before rock concerts, seems to zap your seizures before they zing you. You can thank compounds called cannabinoids for that, but what are they? It seems too good to be true, but respected physicians and accredited researchers agree—cannabis can stop a grand mal seizure in its tracks.

Scientists aren’t exactly sure how pot alleviates convulsions, but they believe one particular cannabinoid, called CBD, helps to calm excessive electrochemical activity, which is responsible for epileptic seizures. Epilepsy is just one condition that pot seems to offer dramatic forms of relief. Muscle spasms, depression, PTSD, and arthritis are distinct conditions, but marijuana can counteract each of them and many others.

What accounts for pot’s seemingly miraculous versatility? More specifically, how can it boost serotonin levels in depressed patients and dampen pain signals in arthritis victims, yet calm the nerves of war vets suffering from PTSD?

The answer lies in the literally hundreds of beneficial compounds found in marijuana. These include THC, CBD, and other cannabinoids that bind to specific receptors in the body. In fact, marijuana is something of an alphabet soup of substances that can address specific deficiencies and imbalances in the body’s neurochemistry. The more you study how cannabis interacts with the body, the more you realize that this plant seems tailor-made to promote homeostasis and wellness.

Let’s take a look at cannabinoids in action and how they can promote optimum health.

Homeostasis is probably the most important concept when it comes to health. In everyday language, it refers to the way the body aims to maintain its balance by regulating itself. To do this, a network of hormonal signaling called the endocannabinoid system regulates bodily processes that involve pain signaling, cellular repair, and the like.

A quick glance at how this system works can not only help explain how disease arises, but also how medical marijuana can promote health.

Let’s imagine that you stubbed your toe while exercising. Inflammation causes damaged tissue, resulting in pain signals being sent to your brain. Maybe you even let out a curse word under your breath (or perhaps not so subtly); depending on the severity of the injury, you know it’s only a matter of time before you’ve completely forgotten your little mishap.

The endocannabinoid system, of course, is far more complex that our simple example suggests.

In fact, it’s instrumental in regulating not just pain signaling, but also psychological mood, immune function, and many other bodily processes central to our health and well-being. So much so that many scientists now believe the impairment of the endocannabinoid system may be the root cause of fibromyalgia, MS, arthritis, depressive disorder, and a host of other diseases.

“Cannabis is the single most versatile herbal remedy, and the most useful plant on Earth. No other single plant contains as wide a range of medically active herbal constituents.”

Medical marijuana is loaded with literally hundreds of compounds called phytocannabinoids, which is just a fancy way of saying cannabinoids derived from a plant source. Essentially, the cannabinoids in marijuana either mimic or counteract the endocannabinoids our body naturally produces.

As mentioned, some researchers have proposed that impairments or defects in the body’s endocannabinoid system may be responsible for many common illnesses. They’ve labeled this proposed spectrum disorder Clinical Endocannabinoid Deficiency (CECD).

Unfortunately, federal restriction on cannabis research has greatly hampered the studies that would shed light on this topic. Nevertheless, anecdotal reports and many clinical studies indicate that numerous health conditions respond well to cannabinoid-based medicines. 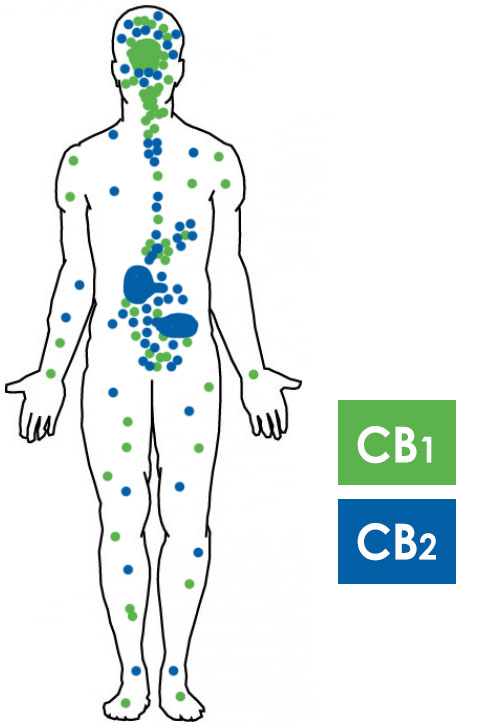 Presently, scientists believe there are three main types of cannabinoid receptors in the body:

“Research has shown that small doses of cannabinoids from cannabis can signal the body to make more endocannabinoids and build more cannabinoid receptors. This is why many first-time cannabis users don’t feel an effect, but by their second or third time using the herb they have built more cannabinoid receptors and are ready to respond. More receptors increase a person’s sensitivity to cannabinoids; smaller doses have larger effects, and the individual has an enhanced baseline of endocannabinoid activity. I believe that small, regular doses of cannabis might act as a tonic to our most central physiologic healing system.”

Recently, a landmark report conducted by the National Academy of Science, Engineering, and Medicine concluded that marijuana is undeniably effective in treating pain, nausea, and muscle spasticity.

The authors of the study urgently called for lawmakers to lift federal restrictions that prevent large-scale clinical studies from investigating marijuana’s potential as medicine.

The potential health benefits of cannabinoids in marijuana—specifically their ability to remedy deficiencies in the body’s endocannabinoid system—are too promising to ignore. Indeed, investigators have identified a range of individual cannabinoids and the conditions they’re very helpful in treating.

Here’s a list of some of the better known cannabinoids:

Individual cannabinoids hold great promise in helping researchers develop targeted therapies, though many experts believe whole-plant therapies may represent the best approach since individual cannabinoids seem to have a synergistic effect on one another. Essentially, they’re more effective collectively than isolated.

Scientists call this phenomena the “entourage effect,” referring to the fact that the whole plant is more than the just the sum of its parts.

In all probability, the future of medical marijuana will entail specific strains that contain the appropriate ratio (or combination) of cannabinoids suited to particular endocannabinoid deficiencies.

There’s an amazing correspondence between the phytocannabinoids in marijuana and the body’s endocannabinoid system. The notion that compounds in cannabis can alleviate epileptic seizures, dampen pain signals, stimulate appetite, improve creativity, lessen anxiety, and boost mood is truly amazing when you think about it.

The body’s endocannabinoid system is so central to our well-being and medical marijuana is so exceptionally abundant in compounds that appear to both modulate and remedy its function.

For years, aspirin—which is made from willow bark—has been hailed as a “wonder drug.” But given medical marijuana’s unmatched versatility and effectiveness, it may deserve that term even more. Perhaps “miracle drug” is more like it.