Men’s Wearhouse Founder Comes Out in Favor of Pot Legalization 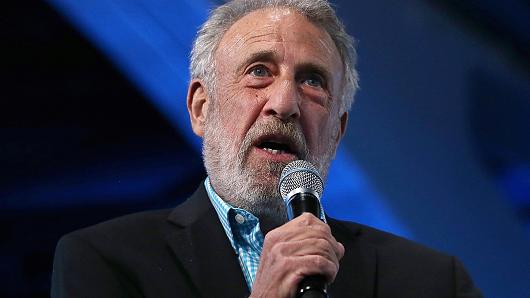 John Mackey, co-CEO of Whole Foods Market; Richard Branson of the Virgin Group; billionaire financier George Soros; and Peter Lewis of Progressive Insurance (who was a longtime advocate before passing away in 2013).

Now, there’s a fifth CEO–George Zimmer, founder of Men’s Wearhouse, a company that fired him two years ago. He divulged to CNBC that he’s a cannabis aficionado of sorts.

“I’ve been smoking marijuana on a regular basis for about 50 years,” Zimmer said to CNBC, before joking, “As you can see, it’s really impacted me in a negative way.”

check out the video here!

Zimmer gave the keynote speech Friday at the Cannabis World Congress & Business Expo in Los Angeles, pushing for legalization. “Everybody in the country knows what the truth here is, except the 535 people we elect to make these decisions in Washington, D.C.,” he told attendees. “It’s astounding.”

He’s throwing his support behind an initiative to legalize recreational marijuana in California next year, just as he supported the proposition that failed in 2010. No matter what form legalization might take, Zimmer said, “I think it’s important that we protect limited home cultivation without any government licensing, so whether it’s one plant or 10 plants, I don’t know, but I think that’s very important.”

Inside the Los Angeles Convention Center, he was surrounded by a variety of start-ups hoping to cash in on the legal pot craze. Zimmer said he looked into investing in one such company a year ago but decided not to—not least of which had to do with the Internal Revenue Service.

“There are still a lot of questions that are raised in terms of dispensaries, and the way the IRS does not allow normal business deductions.” He’s hoping that could change, and that at the very least, the federal government will remove marijuana from the list of Schedule I drugs.

“It’s treated like it was heroin,” he said. “Everybody’s who is in high school hears that and goes, ‘What are they talking about?'” He said it’s as if “The emperor’s not wearing any clothes. This is the biggest con that has been perpetrated on this country in the last century.”

Meantime, Zimmer is also back in the men’s apparel business. He just launched an online suit and tuxedo rental site called Generation Tux.With the website, a groom or best man can submit measurements and rent formalwear for as little as $95.

“Our business model involves having the tuxedo arrive a week ahead of your event, and you to try it on. If there’s a mistake, we will FedEx another out to you, and if it’s still not right, we will dispatch a tailor to make it right,” he said. Zimmer has also started a tailoring company called zTailors, and he said both companies cost $50 million to start.

Generation Tux has a distribution center in Louisville, Kentucky, with 30,000 suits and tuxedos, and the company hopes to break even in 2017. If it takes off, Zimmer said they will need to raise more money. So would he ever consider going public again? “I wouldn’t go public if it [was] my call, but I’m not going to stand in the way if other people want to do that,” he said.

It’s understandable. His ouster from Men’s Wearhouse was not pretty. Zimmer recalls having dinner with his family the night he was forced out. “It was a sort of uncomfortable quietness at the table,” he said.

“I said to my children, who were probably 10 and 12, I said, ‘Hey, look, Dad got fired,” he said. “It’s not going to mean anything to our lives, but I want you to understand that in life you’re going to have these adversities, and you have to overcome them, you have to learn to overcome all adversity in fact.”

Zimmer also said being fired was “probably the greatest thing that ever happened to me.” It forced him to learn about the latest technological developments in retail, which led to his new businesses.

“My best advice is, ‘You only lose if you don’t get back up off the ground. Every time you get back up, you win,” he said.