Buddie, a Fuzzy Marijuana Mascot, is Cultivating All Kinds of Trouble 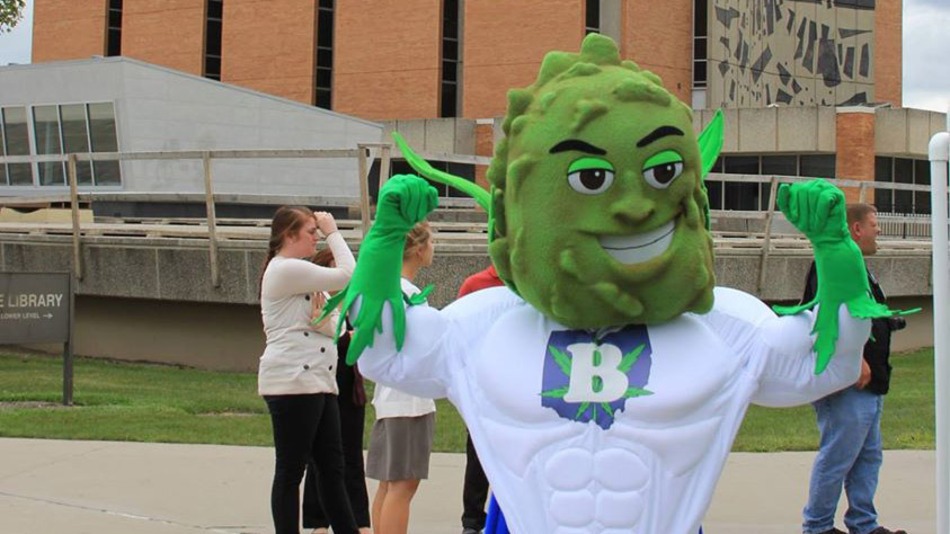 COLUMBUS, Ohio — A caped green superhero stumping for marijuana-legalization votes at college campuses and bars in Ohio has sparked debate over its impact on children.

“Buddie” is a fuzzy, ever-smiling pot bud in a bulging white muscle suit with green trunks, gloves and boots. He arrives in a truck painted with marijuana leaves declaring: “Yes on legalization.”

Children’s health advocates opposed to legalization said Buddie is reminiscent of Joe Camel, the cartoon dromedary proven so effective at marketing cigarettes to teenagers in the 1990s that R.J. Reynolds was forced to retire his image. They said the pot mascot makes light of a dangerous illegal drug in a manner appealing to kids.

“We didn’t believe it when we saw the photos. We were pretty shocked,” said Nick Lashutka, president of the Ohio Children’s Hospitals Association that’s involved in fighting the legalization effort. “This is nothing less than a ploy to market to children.”

ResponsibleOhio, the campaign seeking in November to legalize marijuana for medical and recreational use, said Buddie is nothing like Joe Camel. Executive Director Ian James said the mascot is not marketing marijuana but asking for votes — and speaking exclusively to voting-age students.

“Buddie only addresses people that are 18 and older, and Buddie works specifically with voters,”

“Buddie only addresses people that are 18 and older, and Buddie works specifically with voters,” James said.

“Buddie has no connection with anybody under 18 because anybody under 18 can’t vote.”Also, James said, Joe Camel’s tobacco product was legal whereas anyone selling marijuana in Ohio today “would go to jail.”

Lashutka said he has children, and it is the younger ones who find superheroes most appealing.

“As someone who has a recent college graduate in the family, he’s not playing with superheroes or watching cartoons, but my younger kids are,” Lashutka said.

The legalization question is fiercely dividing the state. It would make Ohio a rare state to move from total prohibition to total legality for those 21 and older. The measure also sets up a network of 10 authorized growing sites in the state.

Republicans who control the state Legislature believe the growing network to be a monopoly, oligopoly or cartel. They’ve placed a separate issue on the ballot barring such economic arrangements from Ohio’s constitution without two separate votes of the people.

Amid the intense and expensive fight emerged Buddie.

They need something that’s going to catch young people’s attention to come over and talk to them.

They need something that’s going to catch young people’s attention to come over and talk to them. Just one or two random people standing on a campus passing out fliers isn’t going to do that.”Newmeyer said she agrees with critics that merging superhero imagery with marijuana is “toeing the line.” But she said Buddie differs from Joe Camel.

“He’s not on billboards, he’s not on clothing, he’s not available for children to see,” Newmeyer said. “They’re not marketing him to the masses.”

But not everyone promoting marijuana legalization is psyched about Buddie. Sam Tracy, a marijuana consultant at 4Front Ventures, slammed the mascot, calling its use an “irresponsible tactic.”

Scott Cecil, an outreach coordinator at Students for Sensible Drug Policy, did the same.

“The legalization group has paid close attention to what many mainstream marketers have done to create an effective personification of their brands. Tony the Tiger, Ronald McDonald, the Nesquik Bunny, Jack from Jack in the Box — the list goes on,” Pullig said. “Also, it is obvious that many of these characters endorse products that are not always good for consumers. They also are targeted to younger consumers.”

James said ResponsibleOhio is seeking the youth vote and Buddie is a way to get it.

“When you look at the millennial voters, they are the least likely to vote in an off-off-year election, but the most likely to appreciate a goofy, off-the-wall, irreverent character, and so we provided them one,” James said.

BY THE ASSOCIATED PRESS