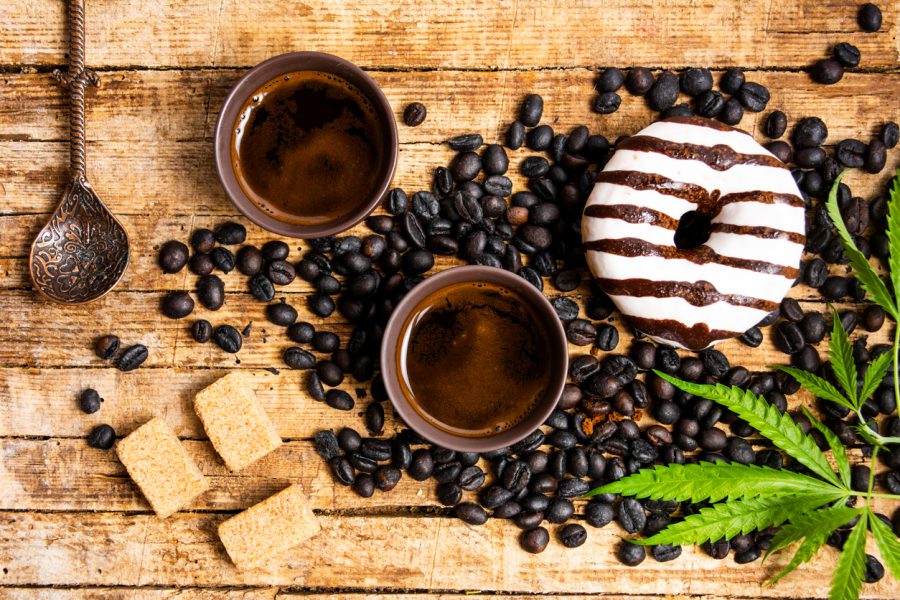 What’s in a name? You’ve probably heard of cannabis strains like UK Cheese and Sour Diesel, but what about Cherry Pie and Creme Brulee? How do these strains get their sweet-sounding names?

One of the first “dessert strains” to emerge on dispensary shelves was GSC (formerly known as Girl Scout Cookies), a mouth-watering cross between the strains OG Kush and Durban Poison. It may sound strange to name a cannabis strain “cookies,” especially when one of that strain’s parents has the word “poison” in the name. But this popular strain’s most common terpenes – caryophyllene, limonene, and linalool – combine to deliver a sweet, earthy aroma that’s sure to please any palate.

Following in the footsteps of GSC, a whole menu of sweet treat cannabis strains have hit the market in recent years. Whether you’re an aficionado of exotic strains or you’re just curious about some of the most sought-after cannabis phenotypes, Nugg has got the info you need – along with recommendations of our favorite versions of each strain! Read on for our rundown of the top five dessert strains, and be sure to keep a snack handy when you try them all yourself!

Check out these mouthwatering dessert strains:

This terpene-rich strain is an indica-dominant hybrid that offers the best of its two parent strains: Sunset Sherbet (GSC x Pink Panties) and Thin Mint Girl Scout Cookies (aka, Thin Mint GSC). Originating in the San Francisco Bay Area, Gelato boasts a floral/sour berry aroma and flavor thanks to the relatively high concentrations of the terpenes myrcene, pinene, and caryophyllene, but it’s Gelato’s effects that you’re most likely to remember. Expect a calming high that’s gently euphoric without being overpoweringly cerebral. There’s also a strong body high that’s sure to help relieve pain, stress, anxiety, and with a high enough dose, insomnia. However, when consumed in moderation, Gelato is generally considered an “anytime” strain.

This tart, tasty strain has two rockstar parents: Durban Poison and Granddaddy Purple, aka GDP (Big Bud x Purple Urkle). The effects lean more to the indica side, owing to the strong indica genetics of GDP. While it has some sativa genetics from its Durban Poison parent, some users report that Cherry Pie feels like an 80/20 indica-dominant hybrid. It typically has relatively high concentrations of the terpenes Pinene, Myrcene, Limonene, and Caryophyllene, though each batch will vary. With an aroma that’s reminiscent of sweet cherries and musky earth, Cherry Pie will produce a euphoric yet relaxing high, perfect for unwinding late in the afternoon or after work. Some consumers report a giggly, upbeat effect that’s balanced out by a comfortable dose of pain relief and muscle relaxation.

We here at Nugg recommend you check out THC Design’s prepackaged eighths of Cherry Pie. THC Design is based out of Los Angeles and they’re dedicated to advancing scientific knowledge and cultural acceptance when it comes to cannabis. Each eighth-size jar of flower is tested for purity/potency and weighs in at 3.5 grams.

Expect a burst of flavor when you open the jar and smell this fruit-forward strain. Forbidden Fruit is an indica strain that’s born from Cherry Pie (Durban Poison x GDP) crossed with Tangie (California Orange x Skunk). The buds smell like a mix of tart cherry and bright, crisp citrus – some swear it’s reminiscent of grapefruit. That aroma caused by Forbidden Fruit’s terpene profile, which includes relatively high concentrations of Myrcene, Caryophyllene, and Limonene. In terms of effects, expect a potent full-body buzz that will relax the mind and melt away physical discomfort.

If you’re looking for a strong indica-dominant strain that can tackle pain, stress, and insomnia, Blackberry Cream will hit the spot. This strain combines the genetics of its parent strains, Blackberry Kush (Afghani x Blackberry) and Cookies & Cream (GSC x Starfighter), and its terpene profile typically displays relatively high concentrations of Limonene, Linalool, Caryophyllene, and Pinene. Some consumers report feeling a gentle sense of euphoria, but Blackberry Cream is most frequently used to treat pain, muscle spasms, and difficulty sleeping. Save this strain for after-dinner consumption or the strong indica genetics in Blackberry Cream could end your evening early.

If you’re looking for a great batch of Blackberry Cream, Nugg recommends you check out a 3.5 gram eighth of Erba’s cannabis. Expect a great product at a great price every time you order from Nugg!

This indica-dominant hybrid brings together three different cannabis lineages: OG Kush crossed with Platinum Kush crossed with GSC. Expect a potent dose of relaxation, appetite stimulation, and eventual sedation from this three-way hybrid cannabis strain. Some consumers swear this strain has a nutty, sweet vanilla aroma and taste, making it a great evening snack. Just don’t indulge in this strain too early in the day or you might find yourself snoozing on the couch!

Anyone interested in checking out Creme Brulee should try 8th Brothers. Each 3.5-gram eighth is certified organic, raised and harvested in Mendocino County. Enjoy sun-grown cannabis from one of the finest cannabis regions in the world with 8th Brothers, available now from Nugg Club!

If you live in the Los Angeles area and are ready to try one of these mouthwatering dessert strains, click here to see if Nugg Club delivers to your address!